This proposal is for the restructuring of LQ tokenomics to reflect a more balanced distribution curve that rewards Liqwid’s key stakeholders with the ability to upgrade the protocol. Liqwid community developers, protocol users, LQ stakers and community members are all core participants who add value to the ecosystem in unique ways.

The initial token distribution schedule was focused mostly on the community incentives and for good reason, a community-led DeFi protocol must be represented by an empowered ecosystem of protocol users. The initial allocation of 70% total LQ supply to community incentives (suppliers and borrowers) is a large concentration of tokens to a single group of participants.

This proposal is to adjust the LQ tokenomics with respect to incentivizing all of the protocol participants, both in the near term and further out into the future. In general LQ rewards should accrue to users who contribute to the protocol’s TVL and provide liquidity. This includes community incentives, LQ stakers in the Agora Safety Pool (insurance pool) and LPs of LQ/ADA pools across DEX’s.

When considering the distribution of tokens as incentives (e.g. SundaeSwap Yield Farming) liquidity bootstrapping is the most common route for users to earn rewards. That said, if the community finds it worthwhile to instead optimize for increased liquidity across Liqwid’s three main liquidity pools (Liqwid markets, Agora Safety Pool and the LQ/ADA pool) this proposal represents an alternative potential path. 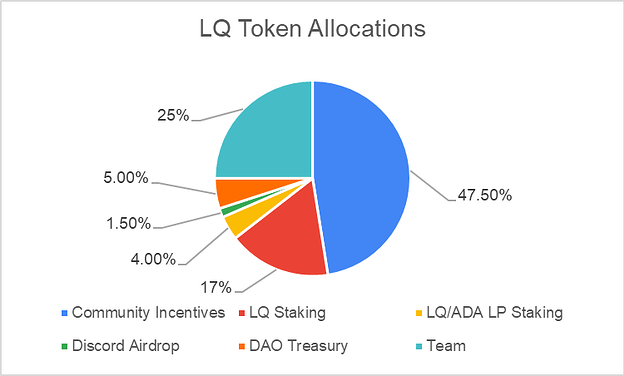 The specific updates to the LQ tokenomics include:

-A community moderator posted this in Discord earlier and it feels very relevant to be included here.

*Note none of these proposal changes would be implemented until v1 mainnet launch.

Updating the LQ tokenommics to reflect balanced incentives and hence liquidity provision across multiple liquidity pools is a strategic route for the community to analyze and consider. Spreading allocation from Community Incentives will give LQ stakers and liquidity providers a sustainable incentive for their deposited liquidity. Achieving the vision of implementing an ownerless money market protocol will demand a balanced set of incentives capable of rewarding long term participation across all Liqwid pools.

I would have liked the 3 year release schedule lengthened.
Still voted ‘for’ because I agree with the other points.

I like to see 1,5 % drop for liqwid goverment forum users as well as discord users.

LQ LP rewards on sundae would be VERY beneficial to keep the pool up and provide sufficient incentives so to cushion from IL.

I think changes before release is jumping the gun a bit. What about other dex beside sundaeswap?

My issue with this proposal is the fact that we would be picking Sundaeswap as THE Dex. There are several others launching soon with arguable better solutions.

Agree, what if the LP incentives were split between different dexes and the community can vote on which ones? Sundae, Minswap, ErgoDEX, etc. or whatever the community would want to nominate/vote.

Same but the other points are well spoken for

It makes sense for SS to get the LP incentive, since they are the dex with the most TVL across the dexes which are currently available. Would it be possible to provide LP incentives to other dexes when they garner enough TVL?

out od the 4%, there shoud be an exapnsion this point od proposal to how muxh and to which amm dex.

I made a comment on Discord earlier this evening about how I was opposed to incentivizing liquidity on Sundae specifically, and this post is an expansion as to WHY.

Why NOT SundaeSwap NOW

I’m fine with the tokenomics proposal aside from the allocation specifically to SundaeSwap. I would prefer we leave a 4% allocation in for FUTURE liquidity incentives. It may not even need to be a direct incentive in a single dex pool. I’m a huge fan of defi 2.0 concepts such as Protocol Owned Liquidity.…if the Liqwid DAO wants to ensure solid liquidity for its token on a dex or selection of dexes, we should consider a Bonding Program as suggested here: Proposal 001 - LQ Token Distribution Update - #12 by PeniSnail This concept is a strong evolution of liquidity incentivizing and provides for long term liquidity as the protocol literally owns it…it won’t be (unless voted on) sold into the market. Bonding provides both long term liquidity and long term price stability, unlike basic dex incentives which provide neither of those things.

I strongly urge we consider eliminating the SundaeSwap specific allocation in the new tokenomics, leave the 4% allocation in place, and have a discussion specifically around where and how to best use that for the long-term health of Liqwid.

I would love to see the staking incentive to more Dexes at least another one MinSwap as they are the next one launching.

Very interesting take, would be interested to see DC‘s thought on your response

Nice write up.
Just wanted to add to the subject of not committing only to one DEX, Sundaeswap. From what I can see, SS is not just another DEX for Liqwid. It is the DEX. There is clearly a close partnership between the two projects that I don’t see LQ has with the other DEXes that you named. When SS launched with all the hype of the Cardano community, LQ was chosen as one of the few liquidity pairs that actually got generous SS tokens rewards. Being one of the biggest pairs on SS brought exposure and, in my opinion, a huge boast to this project’s reputation. As a result, we saw a huge spike in demand for the LQ token and an increase in the price.
So does this justify the 4% liquidity incentive all going to SS? I’m not sure but my point is that we are not starting from a neutral position of waiting to see which DEX will come out on top. LQ already has close ties with SS and will probably look to maintain that relationship for the foreseeable future.

Allocate 17% of token supply to LQ stakers in the Agora Safety Pool; this pool serves as a protocol reserve and insurance pool in the event of a shortfall.

I cannot vote at this time due to a lack of information on how the Agora Safety Module will work and how the 17% rewards are distributed to a staker. I am warm on the proposal, but I think it lacks information to make a decision.

The comments on waiting for other DEXs to assess their features is speculative. It is speculative to assume that other DEXs will have better features and speculative to assume that Sundae won’t evolve to compete with them in the future. Advertised features to generate buzz does not equate to fully functional, working features at launch. With that in mind, I don’t think it is wrong for the protocol to mint early partnerships with a DEX that is fully functional now. Much more goes into building these products than just what we see advertised. Team execution is a factor as well. So far, we have seen the Sundae team execute the delivery of the protocol and there is a lot of confidence that they can continue to innovate new features. We cannot have “unlimited” partnerships, there is a finite limit on the benefits of them. I trust that if the team thinks SS is a solid DEX worth a long term partnership, then it is worthwhile to pursue and remind everyone that SS will evolve and add features over time.

The reason we need more information on the Agora Safety Module is because long term LQ holders will have to decide, is it better to stake in Agora or with Sundae as these yield farming mechanisms will be competing for LQ stakers / LP providers. What is the expected emission rate of the 17% from Agora? When will the protocol launch to allow this YF in relation to the 4% on SS? A crosswalk timeline showing how this would line up in time would be helpful for users to make a decision. We need to make a decision, how much to stake in Agora, how much to LP in SS, and what are the expected benefits of both and right now we lack information to make that decision. To incentivize good behavior on both protocols, I think this aspect of Game Theory is important.

There are benefits in rewarding long term LP in SS while Liqwid is launching to help stabilize the liquidity, I can see that. It benefits everyone. Low liquidity situations can cause extremes movements in price, both upwards and downwards. As a community, we want LQ in strong/long term hands and to minimize extreme price movements incentives. To be clear, I am not talking about regular trading over time, only large price swings (>20%) in a short period of time (weekly) where people just exit their position and wait for the next 20% pullback. I think this is a benefit to the community to help maintain adequate liquidity on SS while other DEXs launch and the Liqwid ecosystem launches.

In summary I believe more information is needed on Agora before voting for this, but see a strong amount of positives to vote yes.

I really liked all the above inputs, gathering thoughts on pros and cons about this proposal.

Overall, I like the proposal and how the toeknomics has changed.

I agree with some comments above saying about SS and 4% allocation for incentives in Lq/ada pair.

On my side, we can hold this 4% distribution open, but it’s better as an idea to NOT put aside all the other dexs. Liqwid protocol needs to be open to more than one dexs. Many will feel other dexs to suit more on their needs, their Expectations and in general how they work.

What I would suggest? The community or the core members of the team to suggest which dexs they want to give incentives for the pair LQ/ada. It’s more fair for everyone, and liqwid as a DAO hold an equal state to every dex in cardano ecosystem.

MY 2 cents. Let’s discuss it more.

Hello to eveyone.My suggestion is to see the staking insetive to more dexes.It.will.much fair and more more attractive.Yoh will see.Have a nice day to all of you

If other Dexs gave us same benefits as Sundae swap (create lq/ada pair then give out 166.666 of their tokens daily for 6 months) from the first day then we can discuss it. Otherwise my vote goes to SS as they have shown greater support to this protocol.

We discussed this point internally for sometime and we collectively decided anything beyond 3 years is the equivalent of an eternity in crypto. Just consider what the space looked like in 2019. Now consider what it will resemble in 2025. this is why we felt 3 years was a reasonable sweet spot.